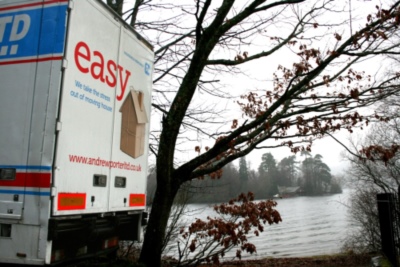 We were faced with some creative thinking when helping the residents of an unusual island home move back to the mainland.

The complex move involved relocating a couple’s property from a six-bedroom Grade II listed mansion on Derwent Isle, in the middle of Derwentwater in the Lake District.

The seven-acre island is owned by the National Trust, which rents out the 18th century property, that is open to the public five days per year, on a long-term basis.

Andrew Porter Limited had helped the couple move into the property 10 years previously, so the firm sent an experienced crew of four, who were familiar with the intricacies of the island home and the problems it presented.

It took a full day to load the removal van, and more than 10 of the 15-minute round trips on the property’s motorised dinghy to ferry items from the island to the shore.  The 400-mile journey then began to move the couple to their new home in Dorset.

Managing director of Andrew Porter Limited, Tim Aspey, commented: “Even though we have completed moves to and from this property twice in the past, it remains a very tricky process and is a job which requires supreme care, attention and above all, patience, to ensure that everything runs smoothly.

“If the loading of the small boat were to be judged incorrectly, it would be all too easy for the contents to get a soaking.

“Our crew did a fantastic job, despite the bad winter weather on the day.  Luckily the lake had not frozen over, as it has been known to do, so there were no delays to the move.”

The house was built by an eccentric, Joseph Pocklington, who also constructed a chapel and a small fort on the isle. The closest village to the property is Portinscale, near Keswick.  No cars are allowed on the island, which has mature woodland surrounding the property, although there is a garage and parking area on the mainland.